A very few Marushos were produced in early 1964, so they must be considered 1964 models. In fact, it is possible that a working Marusho was constructed before the end of 1963. These early bikes were referred to by the U.S. Marusho Corp. as model 'Imperial', but quickly changed to 'ST'.

About 600 of these 500cc opposed twins were produced for the 1965 model year, primarily for the U.S. market. 150 of these are in the Register. Most were black and silver, with a few painted the optional candy apple red. Distinguising features of this model are that the cylinders were silver, the carbs 22mm, the r.h. tool box cast aluminum. Frame numbers are F9-0001 through F9-0590, engine numbers 2-0001 through 2-0590, seldom matching the frame number. A few of the earliest examples, such as this one, had a round BMW-style taillight, but most used the same Stanley taillight as Hondas of 1965. The V-twins had used a rotary shift mechanism which allowed shifting from 4th to 1st, and there was a yellow '3rd gear indicator light' to show that it was safe to upshift. The 500cc models used a similar model with the rotary feature disabled, but still had the yellow light.

Incidentally, the '9' and the '2' in the serial prefixes yield 'R92'. The few of this model that were badged as Lilacs for the non-U.S. market, were known as model R92. There are 150 STs in the Register, and the Register excludes known examples where the serial numbers are not known. It is reasonable to conjecture that half of all Marushos are still retained by enthusiasts.

For 1966 only 180 Magnums were built, of which 63 are currently in the Register. Frame numbers are F9-0601 through -0779 and engine numbers, again seldom matching, are 2-0601 through -0779. Obvious changes included an all-black paint scheme (or, again, the optional candy-apple red), black cylinders in the style of the BMW R69S and indicating the sporty nature of the modified engine, 28mm carbs rather than the 22mm variety, a chromed steel right-hand side tool box rather than the alloy style and a new (and cheaper) throttle cabling system. Gold pinstripes were taped rather than painted and two gold chevrons with no known significance were applied to the rear fender. Internally, many improvements were made to the clutch, crankshaft, cam and cylinders. Horsepower was increased from 35.6 to 40.

The 4 black and white photos are of the author's Magnum F9-0667 and carry no copyright restrictions. The color photo is of Brian McDonough's (GB) Magnum F9-0708 as restored by Greg Holliday. This bike won best of show at the Staffordshire vintage bike show in April 1992. Photo © Greg Holliday. 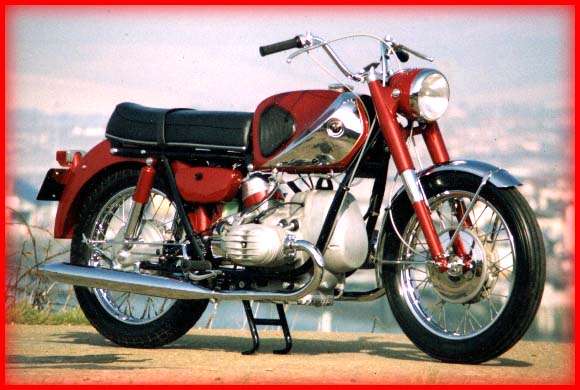 The last bike Lilac built was the Electra. Despite flagging sales of the Magnum, numerous changes were made including the electric starter (reportedly from an Italian car), a cartridge oil filter system, 2 (count 'em) big alloy side covers (one for the tools and one for symmetry), thick cylinders and a chromed grab bar at the rear of the seat. Ads mentioned an upcoming bored-out 600cc version and even a planned 750cc. The electric start concept was about as effective as BMW's first try, that is, the tiny battery was only good for a few seconds, but there was a usable kick-starter tucked in very tight against the left-hand sidecover. It condemned the decal on the cover to being destroyed right away, and the fact that there was no choke or even a tickler on this model meant that starting could be a chore.

Footnote: The author has a nearly complete set of blueprints for the Electra (rather crispy) that confirm that the changes for 1967 were indeed designed in the U.S.